The Papua New Guinea liquefied natural gas (PNG LNG) facility started exporting LNG a little more than three years ago and has put the island nation on the world’s energy map. And for local citizens, this achievement has translated into jobs and opportunities.

Today, some 2,500 employees work at PNG LNG, of which more than 80 percent are Papua New Guineans. The jobs are wide-ranging and include highly skilled technical positions to operate and maintain intricate machinery and industrial equipment found across the facilities.

An important aspect of driving this local employment number has been a focus on training, including an intensive operations and maintenance trainee program targeted at recent high school graduates. This program gives young Papua New Guineans the technical know-how and hands-on experience – along with the confidence – to tackle highly sophisticated equipment. 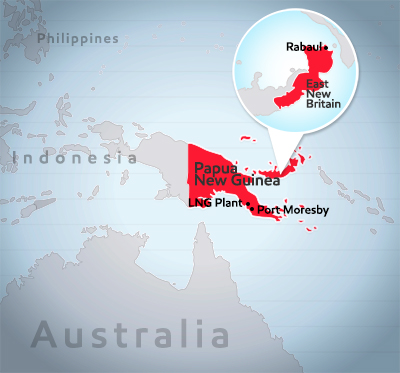 In just a few years, more than 200 young Papua New Guineans – 25 percent of whom are women – have participated in the program, including recent graduate Michelle Samai, who grew up in the island province of East New Britain.

“I used to read about PNG LNG in the paper,” Samai explains, “but I never imagined I would get to work there.”

Samai started working for PNG LNG in 2015, as part of its third intake of trainees. She was formally hired as a maintenance specialist after successfully completing her year-long traineeship.

She and her teammates are already tackling big assignments and big equipment. This includes maintaining the turbines that power 10 house-sized, 30-megawatt compressors used to cool and liquefy the natural gas that is piped into tanks before being shipped offshore.

“This is the first time this type of maintenance has taken place at the plant that involved our own employees – and employees from Papua New Guinea,” says John Hayes, a maintenance coordinator at the LNG plant.

The compressors recently reached their milestone of 25,000 run hours and were due for engine replacements. The meticulous process involved multiple skilled technicians from both ExxonMobil and GE, the company that manufactured the turbines.

“Until this latest round of maintenance, we typically shipped our compressors to a GE facility overseas, which was a time-consuming process,” Hayes adds.

Samai says that she likes to work as part of a team on both large and small projects. “One day we can be greasing and changing bolts on a pipeline, and the next we are maintaining a large compressor,” she says.

Beyond the technical feat involved in maintaining such complex devices, the fact that this operation took place onsite at the PNG LNG plant underscores Papua New Guinea’s emergence as an energy exporter. The numbers speak for themselves. Last year, the company exported 7.9 million tons of LNG, while in 2017, production has reached almost 20 percent above what the plant was initially designed to process.

PNG LNG’s natural gas exports are expanding Papua New Guinea’s economy. But just as critical are the jobs the plant has helped create and the resulting long-term opportunities for the country.

Header: PNG LNG technician Michelle Samai working on a 30-megawatt refrigerant gas compressor. PNG LNG has 10 of these turbines across its sites, which help cool and liquefy natural gas.