One constant in the world of energy is that things never stay the same. So when we discuss the fuels and sources that power our lives, it’s worth keeping in mind that the energy mix isn’t set in stone. There’s no better evidence for that point than this chart. Showing ...

One constant in the world of energy is that things never stay the same. So when we discuss the fuels and sources that power our lives, it’s worth keeping in mind that the energy mix isn’t set in stone.

There’s no better evidence for that point than this chart. Showing the remarkable shift among energy sources worldwide since 1850, it’s worth some careful study.

Aside from manual labor, through most of the 19th century (indeed, for all of human history up until that point), humankind primarily relied on biomass for its energy needs, largely for cooking and heating. That soon gave way to coal, which helped power growing industrialization around the world.

In the 20th century, with the rise of the automobile and other transportation advances, coal’s dominance began yielding to oil. More recently the world has seen tremendous inroads in the energy mix made by natural gas for a variety of applications, including electricity generation.

It’s fair to say that gains in living standards over the past two centuries have been enabled in large part by a transition to modern energy sources. As the world’s population grew to more than 7 billion people, investment in the world’s energy system was critical, as demand reached a level about 20 times what it was in 1850.

The point is that the world’s energy system is in constant motion. Advances in technology and energy are ongoing, working together to provide practical, affordable, and convenient solutions for people everywhere. So what the world uses for energy today, and in what proportions, will likely be different years from now.

How different? Consider this side-by-side comparison from ExxonMobil’s recent Outlook for Energy: 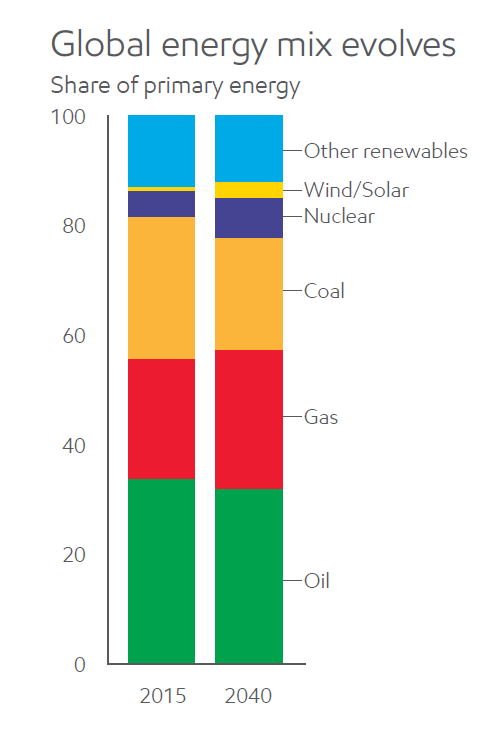 At first glance, the two scenarios may not seem too different. But spend a little time pondering it, and the significance of the shifts represented here becomes clear.

Currently, oil and coal are the biggest contributors to the global energy mix, with a substantial share from natural gas.

Over the quarter century to 2040, demand for coal will peak and its share will decline. This will be made up by growing contributions from natural gas, nuclear, and renewables – driven partly by market forces and partly by governments’ push for lower-emissions fuels. Oil will likely remain the essential fuel for transportation, driven by growth in economic activity, trade, and mobility associated with rising living standards in the developing world. The gas/coal shift is a big story, perhaps most noticeable recently in the United States thanks to the shale gas revolution.

The story is even bigger when you consider the growing scale of things. Since overall energy demand is expected to rise by about 25 percent by 2040, the percentage increases for natural gas, nuclear, and renewables actually represent much larger total amounts for these sources.

A century ago the writer Donald G. Mitchell observed, “The future is a great land.” Given how the world of energy has evolved over time, and how we expect it will continue changing in the coming decades, I can’t help but agree.

One of the most hopeful demographic and economic trends we have seen in putting together ExxonMobil’s annual Outlook for Energy: A View to 2040 is the expansion around the world of the middle class. The numbers reflecting this change are extraordinary. At the turn of the century, about 1.3 billion ... Seven things to know about the future of energy

The future will look different from the past and the present, but how exactly?