What better way to chart the history of an energy company than by the vehicles that carry its cargo? The company that started out as Standard Oil experienced a decades-long period of growth, ultimately forming today’s ExxonMobil. Each merger, acquisition or rebrand came with a colorful tale, often told through ads and logos stamped on the sides of trucks and other gasoline carriers.

Browse through these pictures for a look into the early days of the oil and gas industry, told through gasoline carriers. 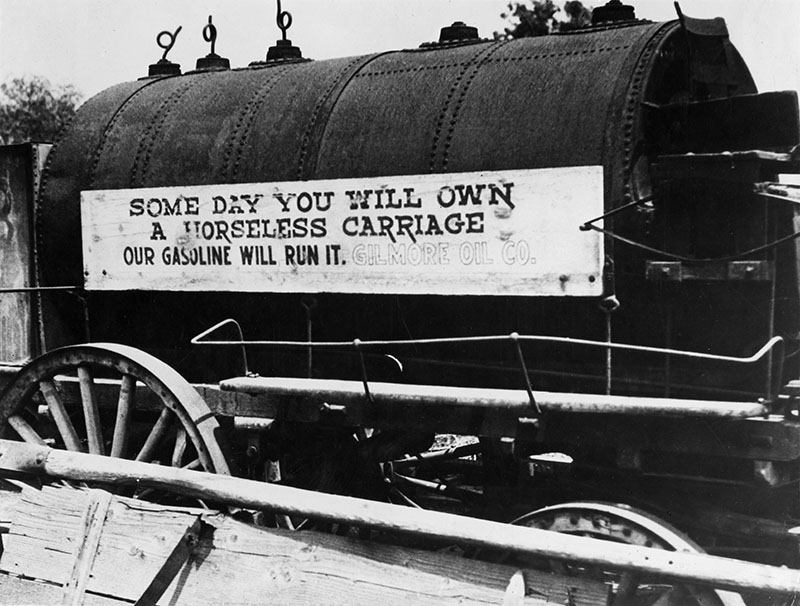 This ad, running on a Gilmore Oil Co. horse-drawn gas carrier, correctly predicted that gasoline – not horses – would one day power “carriages.” Standard Oil Company of New York (Socony) was one of the first users of the horse-drawn tank wagon. Socony purchased Gilmore Oil Co. in 1948, and is one of the heritage companies of today’s ExxonMobil.

Is that a gargoyle? Ever heard of ESSOTM? Standard Oil Company used the brand name ESSO to market its products starting in the 1900s; ExxonMobil continues to market fuel under the ESSO brand in a number of countries. The truck pictured above is from the Anglo American Oil Corporation, the company under which ESSO started. Humble Oil, based in Texas, provided the fuel of choice for notorious playboy and Texan inventor Howard Hughes to use in his planes. Jersey Standard bought 50 percent of Humble Oil in 1919; Humble Oil was acquired by Standard Oil of New Jersey in 1959, and in 1973, Humble Oil became Exxon USA. Mobil 1TM synthetic motor oil, born out of Socony-Vacuum Oil’s Mobilgrease brand, has been a sponsor brand for sports like Formula 1 and truck racing since 1978. Above, a racing truck from Austria celebrates in front of the tanker truck that helped fuel the race that day in 1989.

To infinity and beyond! Since the Exxon-Mobil merger in 1999, the company has continued advancing its methods of distributing fuels and products. The above image shows ExxonMobil Aviation, one of the world’s largest suppliers of jet fuel, refueling a commercial airliner.

ExxonMobil Historical Collection, The Dolph Briscoe Center for American History, The University of Texas at Austin