One fish, two fish, we’re feeling downright Seuss-ish. Why? Famous children’s author Theodor Geisel, known for his addictive rhymes and whimsical characters, had another job before putting on his Dr. Seuss hat. He launched his career with a drawing for a product called Flit, an insect repellent produced by Standard Oil of New Jersey, also known as Jersey Standard, starting in the 1920s.

Ninety years later, Jersey Standard is now part of ExxonMobil, but the company remains connected to these iconic products and the advertisements that brought them to life. Geisel’s ads for Flit featured his trademark Dr. Seuss flair and wit. He also created the line accompanying many of the ads he produced: “Quick, Henry, the Flit!” The insect repellent is no longer in production, but ExxonMobil continues the quest to stop insect bites through its malaria prevention initiative. 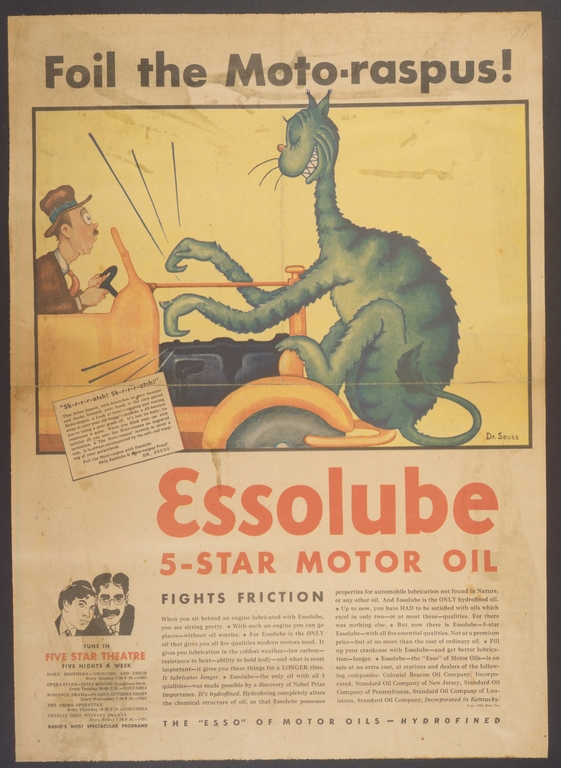 In the 1930s, Geisel brought to life a series of Moto-Monsters known for attacking motors not protected by Essolube, another Jersey Standard product. The ads invite motorists to “foil” the whimsical engine enemies. Essolube will be remembered as one in a long line of engine innovations such as Mobil 1 green motor oil and Mobil 1 Annual Protection. He soon began drawing for Essomarine oil and greases, a line of maritime products. The ads debuted in 1937 at New York City’s National Boat Show, where Geisel showcased seven of his fantastical creatures.

ExxonMobil still has close encounters with denizens of the deep. Microbes – cyanobacteria, to be specific – have the ability to corrode or eat the iron in steel pipelines, making them a bigger threat than any Marine Mugg. Thankfully, research at ExxonMobil’s microbiology lab is keeping the micro-beasts at bay.

Sources:
American Oil & Gas Historical Society
Seussville
Wikipedia
The Seuss, the Whole Seuss, and Nothing But the Seuss
The Art of Dr. Seuss
Collectors Weekly