Racing historian Charles Leerhsen likes to say that the first automobile race started as soon as the second car was made—though we like to say that it started with Mobiloil. Unfortunately the earliest races lacked spectacle and excitement, not to mention fans, because the contests took place at maddeningly slow speeds. However, as the 20th century got underway, automotive and lubricant technology began catching up with drivers’ imaginations. In 1910 Barney Oldfield managed to get his German-designed Blitzen Benz up to 131.72 miles per hour on the beach at Daytona, Florida, making him the fastest man alive and the automobile the fastest form of human transportation at the time. Oldfield’s feat was made possible not only by the technical advances in the Benz’s engine, but also by advances in how mechanics treated engines. Oldfield kept the 200 horses under the hood of his Blitzen well-lubricated with Mobiloil’s most advanced brand of motor oil, which reduced friction and allowed his engine to run at maximum efficiency. 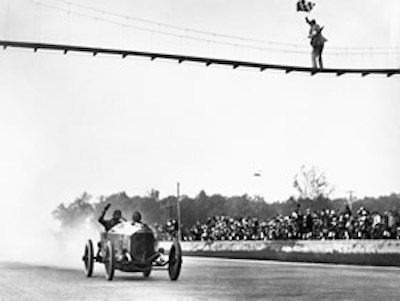 1915 Ralph De Palma, winner of the Indianapolis 500, is the first of many Indy winners to use Mobil products. His average speed: 89.84 mph.

Oldfield was absent from the inaugural Indianapolis 500 in 1911, but the importance of quality lubricants was still front and center. Winning driver Ray Harroun caused a stir by choosing to forgo the use of a riding mechanic, whose job was both to keep an eye on their own automobile’s oil pressure during the race and look for passing cars. Advances in lubricants meant that he didn’t have to worry about his engine blowing up, although the lack of a riding mechanic meant that Harroun risked a collision with another driver.

Keeping the new breed of high-performance engines lubricated became so important that in 1913 Vacuum Oil Company established a set of criteria for classifying engines by type and developed a chart to let mechanics know proper methods of lubrication. Unsurprisingly, Vacuum products became the chosen lubricants of a long line of Indy 500 winners beginning in 1915, when Ralph DePalma wowed a crowd of over 40,000 by taking the checkered flag with a record average lap speed of 89.84 miles per hour.

By the 1940s the importance of quality lubricants on the racing track was common knowledge. Indy winners like Mauri Rose, who won the 1948 event with an average speed of 119.81 miles per hour, even did advertisements for Mobiloil. Today’s winning speeds can average upwards of 180 miles per hour, greatly eclipsing what Oldfield did on the beach at Daytona. But quality lubricants remain as important to drivers today as they were at the dawn of modern racing, as the most recent winner of the Daytona 500, Kurt Busch, can testify.

Header image: Driver Tommy Milton, winner of the 1921 Indy 500, in his racecar. Also in the photo: Barney Oldfield and Louis Chevrolet.