In economic-development terms, a vibrant community can be defined by raw data. But the evidence is more personal on its streets. In Baytown, Texas, a Gulf Coast industrial city on the eastern edge of Houston, the vibrancy created by the city’s thriving petrochemical industry continues to ripple through everyday life. ...

In economic-development terms, a vibrant community can be defined by raw data. But the evidence is more personal on its streets.

In Baytown, Texas, a Gulf Coast industrial city on the eastern edge of Houston, the vibrancy created by the city’s thriving petrochemical industry continues to ripple through everyday life. At the epicenter is ExxonMobil’s North American Growth Project, a large-scale project slated to create jobs and sustain economic development for decades to come.

The North American Growth Project is made up of a new ethane cracker in Baytown and a new polyethylene plant in neighboring Mont Belvieu. Construction started in 2014, and the project is driving the creation of more than 10,000 construction jobs and 4,000 related jobs. 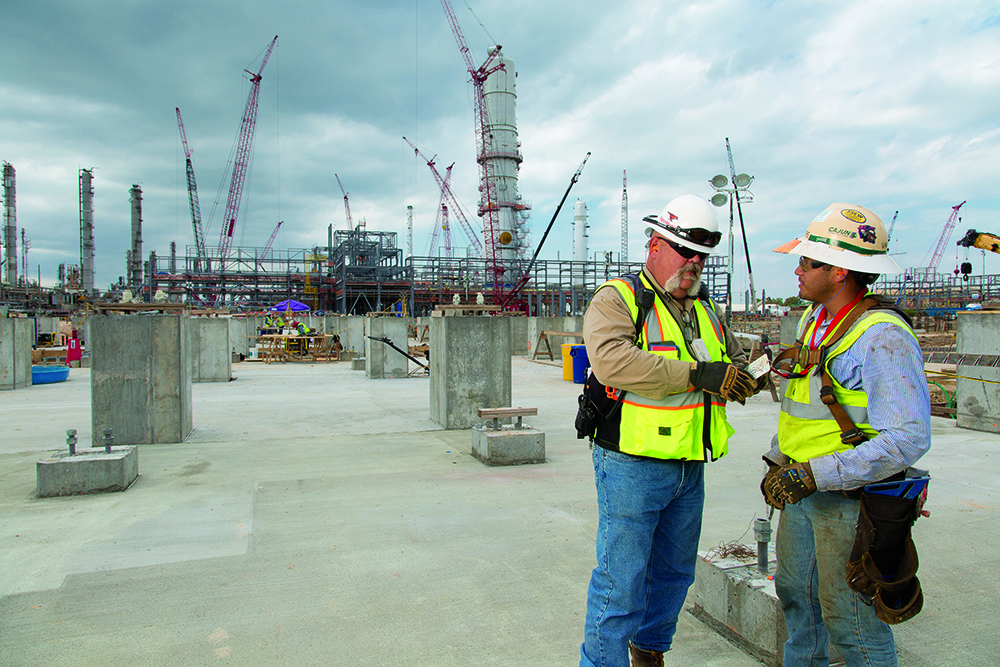 In Baytown and Mont Belvieu, Texas, ExxonMobil is constructing new manufacturing facilities to expand its capacity to produce the building blocks for plastics.

Construction workers are flocking to Baytown and, according to Mayor Stephen DonCarlos, thousands of transient newcomers will remain, building on the momentum laid by earlier generations of job seekers turned residents. Of that workforce commuting to Baytown, the mayor expects up to 20 percent will ultimately move to the city permanently, a population increase that will help grow the tax rolls, fill the schools and create renewed vitality.

For ExxonMobil and Baytown, the story of one cannot be told without the other. Or, as DonCarlos describes it, the two are “inextricably intertwined” and the relationship is more than a partnership.

“They’ve invested a lot in our community,” DonCarlos said. “They’re a large company, but we work with them on really more of a personal basis than most people do.”

That commitment to Baytown is manifested in several examples throughout the city. Specifically, the company has taken strides to invest in beautification projects, from tree plantings to creating a “green belt” around their facilities. Additionally, ExxonMobil has been proactive in its efforts to coordinate public safety, according to DonCarlos, funding six full-time police officers to minimize the impact of traffic and provide added policing throughout the city.

And, more than those jobs directly associated with ExxonMobil, the company’s growing footprint is driving ever-expanding investments throughout the city.

“It’s affected our community from the amount of money that’s spent with vendors and companies in the area that do business with ExxonMobil,” said Tracey Wheeler, president of the Baytown Chamber of Commerce. “I mean you have contractors staying in all the hotels. You have RV parks that are full. You have grocery stores that are selling groceries like crazy.”

The data measuring economic development is vast and impersonal, but in Baytown, the fingerprint of growth and investment touches just about every aspect of life, creating a vibrancy that is woven into the community’s fabric for generations to come.

“Baytown is a city where anything is possible,” DonCarlos said. Take their word for it

What does America’s so-called “manufacturing renaissance” look like? For a glimpse head to Baytown, Texas. Already home to one of the country’s largest refineries, the community is set to see even more economic growth because of the continued expansion of ExxonMobil’s manufacturing operations. Read on to learn from a handful of Baytonians and ...