Work is underway to study the conversion of cellulosic biomass such as corncobs, switchgrass and wood chips into diesel and jet fuel. It sounds like a witch’s brew, but it’s true—researchers are working on a cheaper and faster way to convert cellulosic biomass into biofuels, a critical first step toward ...

Work is underway to study the conversion of cellulosic biomass such as corncobs, switchgrass and wood chips into diesel and jet fuel. It sounds like a witch’s brew, but it’s true—researchers are working on a cheaper and faster way to convert cellulosic biomass into biofuels, a critical first step toward possibly scaling biofuel production for commercial use.

So what is cellulosic biomass? Well, you see it every day. It’s everything from energy crops to wood residue—materials that are inedible, and sometimes considered waste. The use of cellulosic biomass for biofuels could help avoid significant issues associated with traditional biomass sources that produce biofuels, like corn, which could be also used for food. 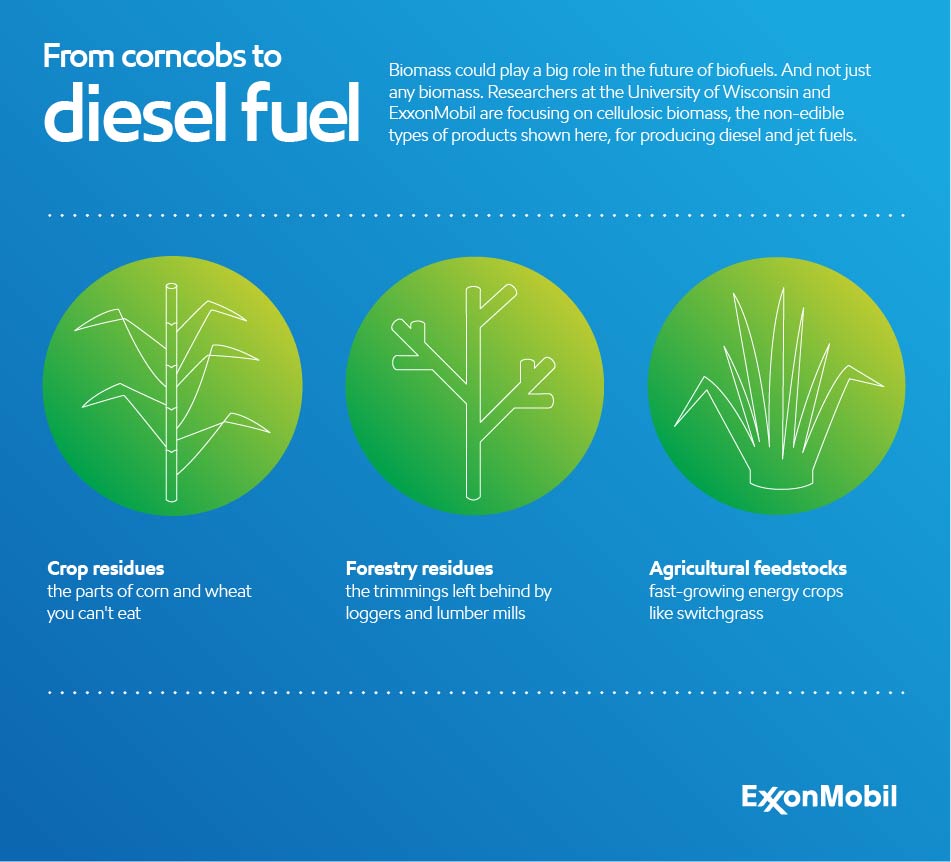 Additionally, fuels made from cellulosic biomass could be lower in greenhouse gas emissions. Right now, though, a lot of that potential remains uncertain. Breakthroughs require scientific research collaborations—much like the one inked by the University of Wisconsin and ExxonMobil—to provide the fundamental knowledge required to move the science forward.

When it comes to turning cellulosic biomass into energy, the University of Wisconsin is one of the country’s leading research hubs. The school was looking for a collaborator that knew about biofuels and a thing or two about refining. ExxonMobil, which knows a good amount about both, turned out to be the ideal choice.

“Cellulosic biomass is cheap and abundant, and a very good option for reducing greenhouse emissions,” said George Huber, professor in the department of chemical and biological engineering at the University of Wisconsin. “On an energy basis, one ton of biomass has the equivalent of three barrels of oil. With current conversion technologies, we can recover about half of that energy as liquid fuel in the lab.” ExxonMobil’s Scott Buchanan, a member of the biomass project team, adds, “We have experience figuring out how to make the most from the crude at the bottom of a barrel, and many of the scientific principles for converting cellulosic biomass into liquid fuel are similar.”

Similar, but not exact. And though Huber and Buchanan have successfully taken the first step—converting cellulosic biomass into precursors of liquid fuels in the lab—there will be many more steps before a finished product is realized.

When you think about it, humans are a little mundane. Yes, we’re agile and curious, and our ability for true independent thought is unparalleled, but from a metabolism and survival perspective, the microbial world is where it’s at. Let me explain. Microbes are living organisms that can’t be seen by ... Scientists at Synthetic Genomics, Inc. (SGI) and ExxonMobil have developed a fatter strain of algae. Fatter algae mean more energy-rich lipids, which can be turned into low-emission biofuels. So when it comes to algae, fatter is better. This is a big deal because energy-rich algae fat can be converted to ...