ExxonMobil’s storied past includes some of the most widely recognized brands and iconic images in the history of corporate America. Today many of ExxonMobil’s vintage advertisements are not only considered important milestones in the history of the ad business, but their striking look and memorable catchphrases make them collectible works of art in their own right. The Vacuum Oil Company was a pioneer in both lubricants and advertising. The company launched the first successful petroleum lubricants business in the 1860s and started using the familiar red Gargoyle to brand its products shortly thereafter. The Gargoyle went on to become one of the most familiar early trademarks, and was nearly synonymous with motor oil during the first decades of the 20th century.

The Pegasus is a truly well-known global emblem. Its origins date back to 1911, when it was first used by a subsidiary company in South Africa. In the 1930s the icon was registered as a trademark in the United States and originally appeared on gasoline pumps and containers of motor oil. Soon the Pegasus, in the color red, became the company’s main symbol, gracing everything from floor mats to license plate toppers. The Pegasus has even served as a landmark in some cities. For example, the neon Pegasus sign that topped Dallas’ Magnolia Hotel (formerly the headquarters of Magnolia Oil Company) became a familiar beacon for airline pilots. Now the neon Pegasus sign rests on the lawn of the Omni Dallas Hotel. One of Theodore Geisel’s many Esso ads.

In the 1930s then-unknown illustrator Theodore Geisel created a series of fantastical creatures to advertise Essolube-branded products. The Zero-doccus, Karbo-nockus, Moto-raspus and Oilio-gobelus were the names of a gaggle of shaggy beasts that would attack your engine if it was lubricated with an inferior brand of motor oil.

Geisel would later find fame creating entire books filled with similar fantastical creatures under the pen name Dr. Seuss. Still, he acknowledged the importance of his experience in advertising, saying that working on the Esso account “taught me conciseness and how to marry pictures with words.”

During World War II Mobil encouraged American consumers to make every drop of gas count by keeping their engines functioning at peak efficiency with Mobiloil lubricants. Various characters reminded patriots on the home front to conserve precious resources for the fight against the Axis, but perhaps none was as beloved as “the War Horse.” Happy the Esso Oil Drop Man, a cartoon character drawn in the shape of a droplet of motor oil, first appeared in a campaign to explain fuel shortages to Danish customers during World War II. However, Happy’s boundless optimism fit in well with people’s more buoyant postwar mood, so he became a familiar sight in Esso advertisements in the United States by the end of the 1950s. With his catchphrase “Happy Motoring,” Happy graced everything from print ads to travel literature, and he even had his own theme song. 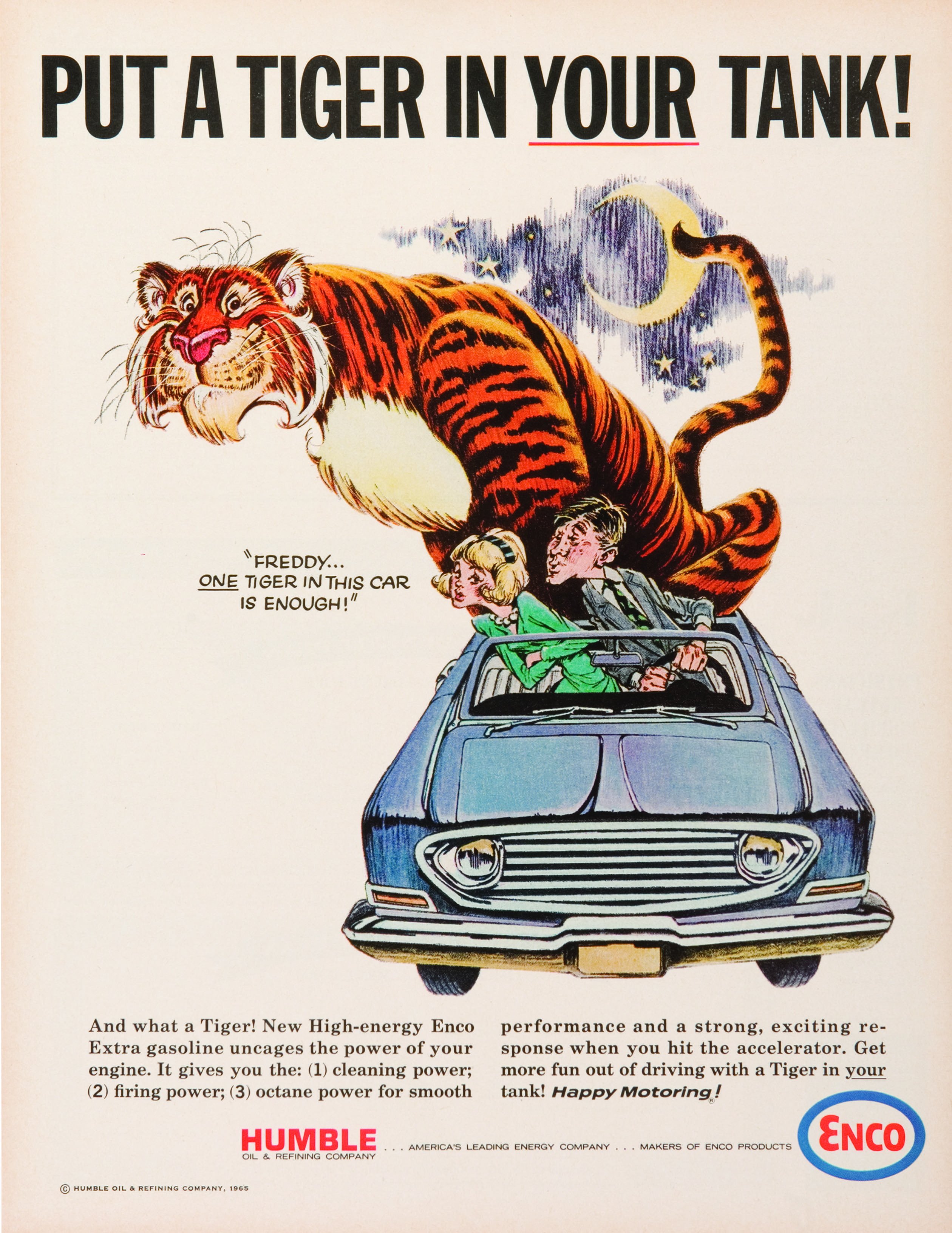 An example of the Put a Tiger in Your Tank campaign

American Oil & Gas Historical Society, Seuss I am, an Oilman

Embedded images: (from top to bottom)

5: By Ella Mullins, on Google images