Moore’s law is alive and well in the energy industry

Moore’s law, which stipulates a doubling of computer power every couple of years because of more efficient chips, doesn’t just drive the electronics industry. It’s also alive and well in the energy sector. It serves as an inspiration for innovators who are constantly looking at ways to scale down the footprint of the massive pieces of infrastructure that help supply the world with energy.

Take, for example, what’s happening at ExxonMobil. A group of company researchers developed a more efficient way to remove impurities, including water vapor, from natural gas. The process itself is not new, but the way it’s practiced now usually involves large steel towers, some 100 feet tall. ExxonMobil has literally flattened the process thanks to a compact piece of technology that siphons water out of natural gas inside a pipeline, negating the need for a massive tower.

The tower-free innovation, dubbed cMIST™, includes two critical pieces of technology. One is something called a droplet generator. Developed by ExxonMobil, the patented generator sprays droplets of solvent that capture the water permeating the gas. The second piece of technology is an inline separator. Activated by the velocity generated by millions of cubic feet of natural gas passing through pipeline, the separators help drain out water and other impurities from the pipeline.

“With cMIST we’ve eliminated a large and cumbersome piece of equipment and replaced it with a solution that fits into a few pipe segments,” explains Norman Yeh, who helped develop cMIST with his team at ExxonMobil’s research company.

The more compact solution means the technology is not only smaller, but also lighter. This is important in places such as offshore platforms, where space is a premium. Yeh estimates that cMIST takes up 70 percent less space than current dehydration towers and makes the dehydration system about 50 percent lighter than current technology. “The space and weight reduction is important because we could, for example, use the freed-up space to deploy devices that could help increase output,” Yeh points out.

After 6,500 hours of research, ExxonMobil has perfected cMIST and is planning to distribute the licensed technology through a vendor. This means cMIST will soon be deployed industry-wide, making the type of reduced scale and increased efficiency predicted by Moore’s Law a hallmark of gas production. Thanks to innovations like cMIST, fitting more power into smaller packages is not just the mantra of Silicon Valley. 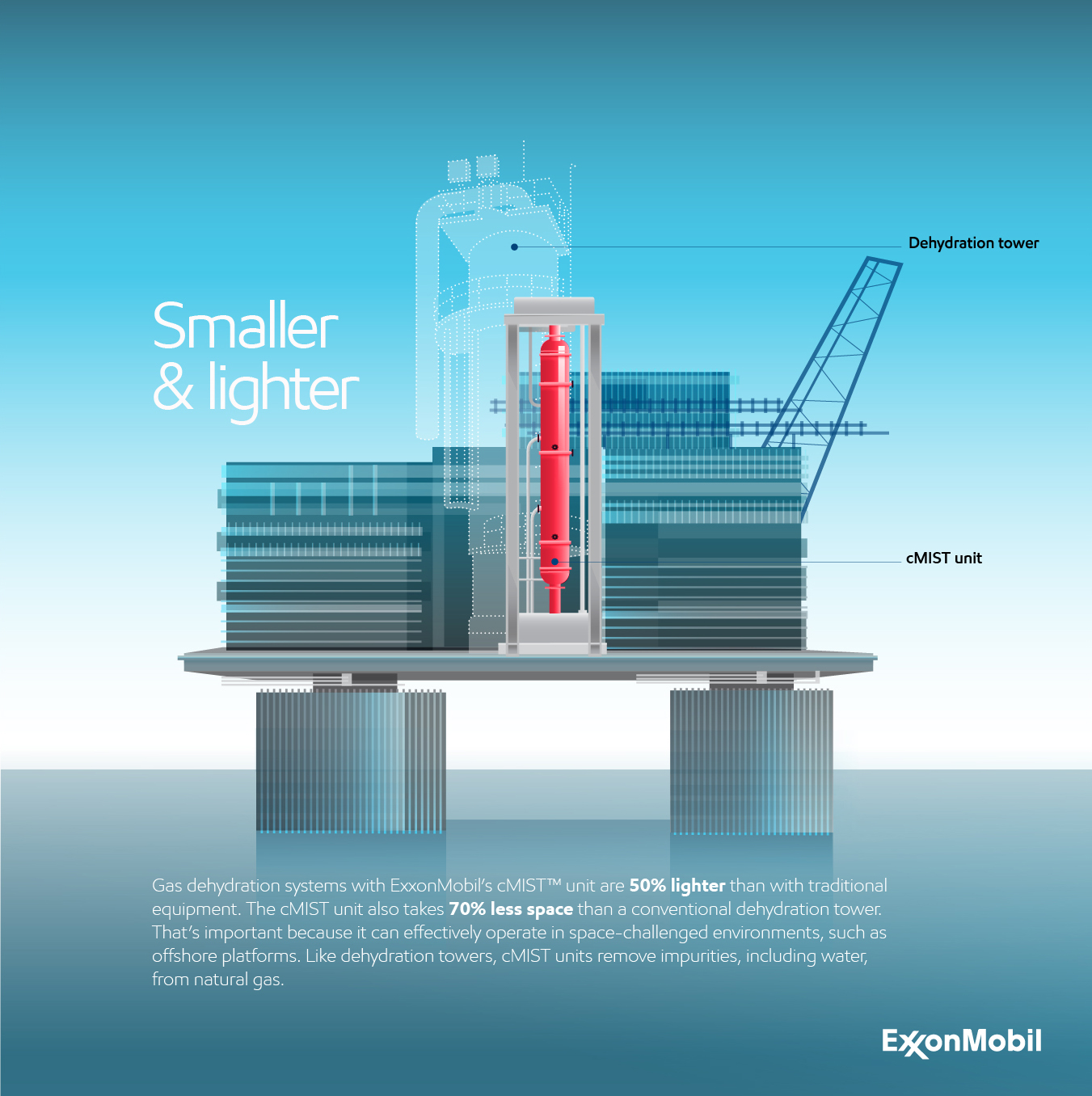