Synthetic rubber, lithium-ion battery components, seismic imaging technology… These are just some inventions from ExxonMobil. Read how our pioneers and others have opened doors to further learning and exploration in their fields and beyond.

It might be easy to dismiss George P. Mitchell’s story as just another rags-to-riches tale from the oil patch. After all, the first six decades of the Texan’s life read like a classic American success story. Born to a Greek immigrant father who herded goats in the old country and ran a series of shoeshine shops in his adopted homeland, Mitchell grew up a child of modest means. A star student, he went on to earn valedictorian honors at Texas A&M before learning the oil business as an employee of Amoco. Striking out on his own in his twenties, he formed a company with a group of partners, including his brother Johnny.

As happens in these types of stories, Mitchell found wealth by prospecting in places that had repeatedly turned up nothing but dry holes. After buying the rights to a piece of land popularly known as “the wildcatter’s graveyard” from a Chicago bookmaker, Mitchell drilled a series of successful wells that put him on the road to financial triumph. Mitchell Energy & Development Corporation eventually became a major player in oil and gas, owning over 1,000 miles of pipeline and 3,000 wells by the mid-1970s. Mitchell himself became a well-known philanthropist, donating more than $400 million to charity through the Cynthia and George Mitchell Foundation. 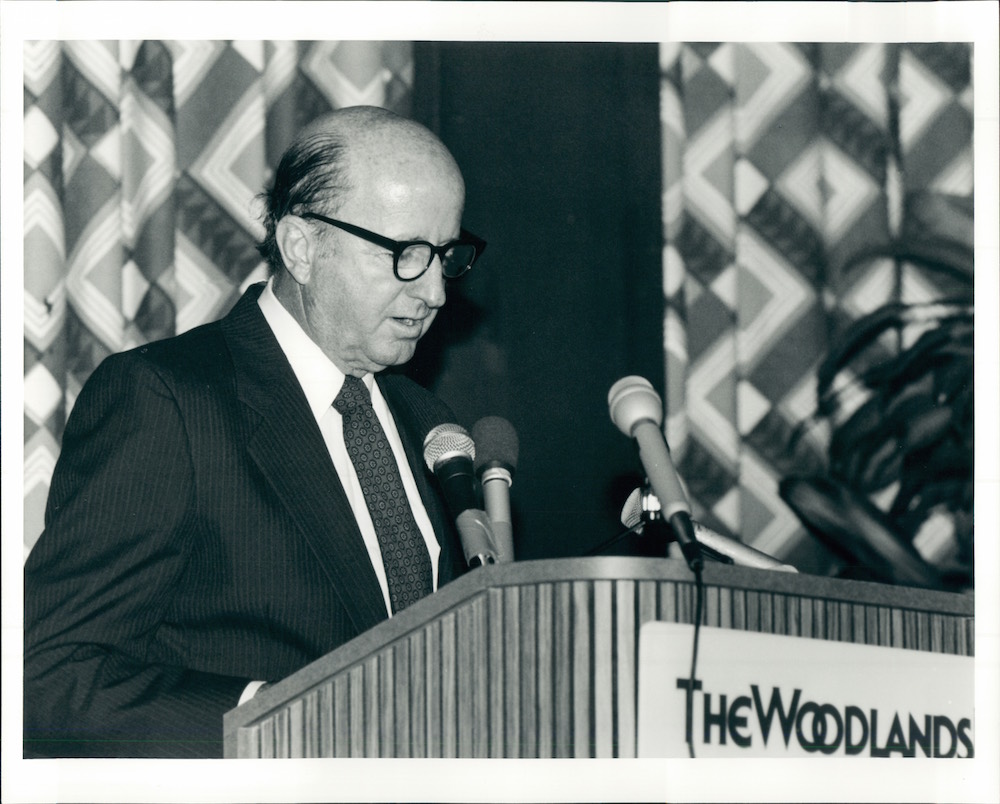 George Mitchell convenes The Woodlands Conference in 1975, a series of events that addressed the issues of sustainable societies. Six more conferences were held over the next 28 years. Conference participants are recognized today as the pioneers of the sustainability movement. Photo credit: The Cynthia and George Mitchell Foundation

However, Mitchell’s story diverges from similar Horatio Alger tales later in his life. After achieving business success, he used a combination of native stubbornness and access to capital to develop the modern-day technique for extracting hydrocarbons from shale, using horizontal drilling and hydraulic fracturing. First used in the 1940s, the traditional fracking method involved injecting fluid along with tiny sand grains to break up the rock and release oil and gas trapped inside. They discovered that this fracturing method exponentially improved the productivity of wells. The result? A breakthrough technology combination that went mainstream across the industry. George Mitchell develops the Pirates Cove community in his hometown of Galveston Island in 1967. Mitchell built Mitchell Energy and Development into a Fortune 500 company that was acquired by Devon Energy in 2001. Photo credit: The Cynthia and George Mitchell Foundation

In his late 70s, after more than a decade of experimentation, Mitchell used the combination of horizontal drilling and hydraulic fracturing to turn the Barnett Shale into one of the most prolific gas fields in North America. But the rise of this technology had effects well beyond the Barnett. Companies across the industry rapidly adopted the technique, with over half of U.S. oil production coming from hydraulically fractured wells in 2015. Fracking also doubled North American natural gas reserves, providing the United States with enough natural gas to last about 200 years at current demand levels. The technique has been in use for over 40 years now, helping ExxonMobil become the world’s largest public natural gas producer.

This enabling technology soon spread from its birthplace in the United States to become a full-blown international phenomenon, with famous energy industry historian, Daniel Yergin, calling Mitchell’s breakthrough “the most important innovation in energy this century,” and noting that it has opened the door for “a century’s worth of inexpensive, environmentally attractive energy.”